While most of the buzz around smart glasses focuses on replacing our mobile phones with features like augmented reality, its health sensing capabilities might be the game-changer smart eyewear needs to make it to the mainstream.

Companies like the start-up Facense (pronounced face+sense) believe the time has come for eyeglasses to breakthrough as the wearable of choice for monitoring wellness and health.

We spoke with Ari Frank, the CEO & CTO of Facense, and here’s what we learned.

Facense, a small company of machine learning & bioinformatics engineers and patent designers with 37 US patents already under its belt, is currently developing a new wellness eyeglass wearable that measures some key health metrics like skin temperature, oxygen saturation (SpO2,) heart rate, and respiration

Why eyeglasses and not a watch or other wrist-based wearable?

We asked Facense CEO & CTO Ari Frank to explain why smart eyeglasses will make all the difference for the next generation of wearables.

“Physiologically, the face is a very active and interesting place and if we put sensors inwards, towards the face, we get much more accurate readings for things like blood flow as compared to wrist based wearables.”

“If you compare the wrist to the face, the skin on the wrist is much thicker and often hairy which make it difficult for sensors to get good readings. But if you take that same sensor and press it to your face’s temple or the nose, you get a better and more consistent PPG (photoplethysmogram) signal.”

There’s even the possibility of sensing a person’s mood and emotional responses like facial expressions and micro-expressions—data you cannot get from a wrist-based wearable.

For the Facense team, using eyeglasses as the tool to house these sensors and capture data makes sense.

Since eyeglasses are something that many people already wear and are comfortable with, adding additional capabilities like lightweight sensors, microphones, and cameras is a good way to capture data without adding any additional burden to a user.

Plus, our bodies act as a good shock absorber and help eyeglasses remain steady even when we’re active.

But the glasses are only part of the story.

Facense uses machine learning, algorithms, and artificial intelligence to process this data to learn each user’s unique physiology and norms.

“The basic idea is that when you wear these eyeglasses during your day, it gets a good idea of your baselines (norms.) That makes it easy to detect any deviation from that baseline and then classify it.”

Once Facense establishes what’s normal for you, its technology will then be able to detect abnormalities and unusual readings and notify you (or your healthcare team) via a companion app.

When will Facense smart glasses be available?

Currently, Facense is building and refining the prototype of its consumer market wellness smart glasses wearable and the companion app with the expectation of a public launch by Autumn, 2021.

The smartglasses include sensors for temperature, heart rate, oxygen saturation as well as two microphones to detect breathing rates and disturbances such as coughing or wheezing.

This combination of features is particularly adept at identifying symptoms of diseases like Covid-19 or the flu, particularly in the early stages.

And it doesn’t end there, Facense continues to research and explore ways ours faces can tell us what’s going on with our bodies and minds, while maintaining privacy and user control over this data.

“The face is such a rich region and we haven’t exhausted all the possibilities yet. There is still a lot of innovation in our pipeline.” 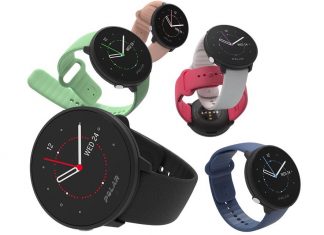 11 tips and tricks for your new Polar Unite SmartWatch

Polar’s new fitness watch, Polar Unite, does much more than counting steps.  Polar Unite motivates you to stay consistent in your training and makes...