Fitbit known for its smartwatches and activity tracking bands such as Fitbit Sense and Fitbit Charge is also exploring a “Ring” type wearable.

According to a new Fitbit patent released today, “Ring for optically measuring biometric data”, the company is researching biometrics detection device that can help with detection of oxygen saturation and more.

The Patent highlights how biometric information such as blood pressure, glucose level, lipid concentration, hematocrit level, or carboxyhemoglobin level could be detected using the new device with built-in optical sensors.

Measuring a person’s blood oxygenation (SpO2) continuously in a form factor that they are willing to wear for long periods of time has been traditionally difficult.

Continuous measurement overnight during sleep is needed to monitor for de-oxygenations related to sleep apnea.

Traditional devices clip over the tip of the finger, or less commonly, attach to the ear or forehead. Given that these traditional devices are uncomfortable, bulky, typically tethered, and otherwise unsuited for casual wear, a Ring-type wearable will be more user-friendly and/or comfortable.

A ring would also allow for general blood oxygenation monitoring throughout the day (e.g., for monitoring chronic conditions such as COPD) without obstructing a user’s activities in a way a finger clip would. Other approaches rely on bulky and obtrusive devices.

A ring is much less obtrusive to normal activities than this approach, and thus more suitable for all-day monitoring.

Given the popularity of Oura Ring and other digital health Ring wearables such as CARD-I for remote health monitoring, it is no surprise that Fitbit might be exploring a new device that is different from a Smartwatch to offer biometric monitoring without a display. 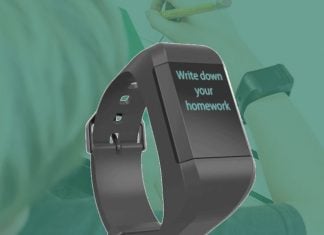 Revibe Technologies, maker of a smartwatch for ADHD and Autism secures $3 million in funding

Revibe Technologies, the maker of a wearable device being developed for ADHD and Autism, announced this week that they have secured over $3 million...

How to stop your iPhone from counting your steps