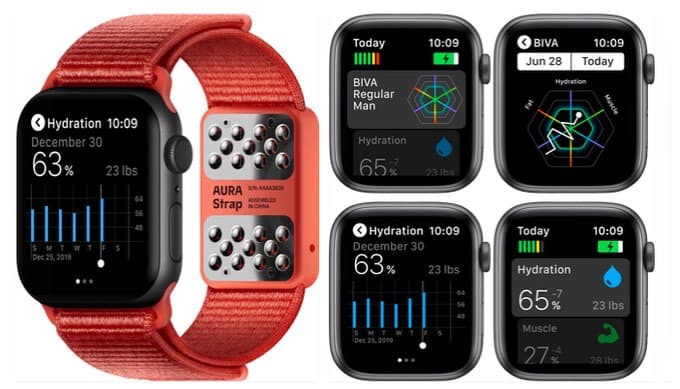 Sensors have become the main eyes and ears of wearable devices today. And we expect all types of wearable sensors to evolve exponentially moving forward. As companies introduce new products, they are able to add new sensors with relative cost and ease.

Sensors such as 3-axis Gyroscope or accelerometer started showing up at the beginning on most wearables. Now, some of the latest devices include PPG Hear rate sensors, barometers, proximity sensors, SpO2 monitoring via pulse oximeters and more.

What are sweat sensors?

There is a new focus in recent years around sweat sensors. These are usually tiny sensors designed to interpret the sweat chemistry your body releases in perspiration. These sensors are placed either on the smartwatch band or as an adhesive on the bottom of the watch.

In this article, we look at the some of the promising features of this new breed of sensors.

We highlight the top 4 developments that are shaping the world of wearables in 2020 along with additional research that has been done in the area of determining stress via cortisol levels and diagnosis of cystic fibrosis.

Powering your smartwatch or wristband with sweat equity

As much as we love our Smartwatches, it’s often annoying keeping these devices charged. How many times have you decided to go out only to notice that your device is out of power and needs a charge?

The power demands for wearables range from 1 milliwatt for a basic step counter to tens of milliwatts for more advanced smartwatches. When using small, centimeter-size batteries, which have capacities on the order of 10 to 300 milliampere hours, this results in battery lifetimes of only a few days at most. Power limitations have often been a major constraint and have stifled potential feature additions in wearables.

Researchers at the Center of wearable sensors at the University of California, San Diego, believe that the first biofuel to power wearables could be your sweat. Body heat as a power source has been used in smartwatches such as the PowerWatch before.

Our Sweat contains trace amounts of a wide variety of minerals and other substances like glucose and lactate. These substances, called metabolites, are by-products of the chemical processes that constantly go on inside living beings, and they make attractive biofuels.

The research team is focussed on lactate because its concentration in sweat rises with exertion. In their sweat biofuel cells, they have successfully created a layer of enzymes that reacts with the lactate in sweat to split the electrons and protons and create an electrical current.

“Certain chemicals found in human sweat can be used as fuel in wearable-size fuel cells. These biofuel cells could offer high power densities in a more practical, wearable form than is possible with any of the existing energy-scavenging approaches. Our team has already developed prototype wearables that generate power from sweat.”

In the experiment, the biofuel cells generated up to 100 microwatts per square centimeter, enough to power both the LED and the watch.

This could also act as an incentive mechanism for your fitness goals.

The more you are able to sweat, the more juice on your wearable!

From powering up to detection via sweat

This is an emerging area in the science of wearables. Researchers and companies are trying hard to read the chemistry of human sweat and draw conclusions.

One of the few products to hit the market in the Apple Watch ecosystem is the Aura Band. This unique Apple Watch Band has built-in sweat sensors on the band and can interpret the molecules and provide interpretations around your body chemistry.

By using the built-in bioimpedance analysis of the Aura band, your Apple Watch can provide you with hydration levels as well as metrics around your body composition.

Many of the wearable companies are currently trying to figure out how they can position and help users and companies in this era of the COVID-19 crisis.

Whoop is using its HRV (Heart rate variability) metrics to sniff out the potential onset of COVID-19 related symptoms. Other wearables are offering built-in Pulse oximeters to get a sense of breathing-related issues.

Epicore Biosystems, a promising healthcare startup, is looking at the frontline detection problem through the world of sweat molecules.

The company’s sweat-sensing microfluidics patch, aka Gx, is in the process of launching with support from Pepsi. Epicore expects it to roll out in the second half of this year. This product was targeted at the Athletes market.

It turns out that Epicore’s sweat-sensing technology may have several roles to play much sooner in the response to the coronavirus pandemic, including monitoring patients’ electrolyte levels and fatigue and non-invasively measuring their sweat cytokine levels.

Cytokine levels are the key basis for Epicore’s approach to evaluating Covid-19 symptoms.

Looking into COVID-19 symptoms through your sweat chemistry

Physicians could use that information to predict cases in which COVID-19 will become life-threatening. And—if we could build that technology into an N95 respirator mask—it could also track the health and fatigue of medical staff.

Epicore’s technology is a flexible, stretchable, single-use patch—like a temporary tattoo—that contains a network of microfluidic channels that capture and route sweat through a series of chambers filled with an assortment of chemical assays.

The Gx version simply measures the rate of sweating as well as the sodium chloride concentration in your sweat. A mobile app uses image processing algorithms to analyze color changes and suggests a rehydration strategy.

Other versions of the sweat patch designed for multiple uses are thicker, though still flexible, with built-in batteries and more electronics for on-board analysis. Instead of image analysis, some measure the conductivity of the sweat to determine levels of lactates, glucose, and creatinine as well as sweat rate and pH.

In a partnership with a drug company, Epicore’s researchers have been testing the use of wearable sweat sensors to monitor inflammation in atopic dermatitis and working with L’Oreal to study skin pH levels.

We recently wrote about an interesting development at UCLA.  A UCLA research team developed a special adhesive that sticks to your existing smartwatch. This adhesive helps with biochemical analysis by monitoring your sweat. 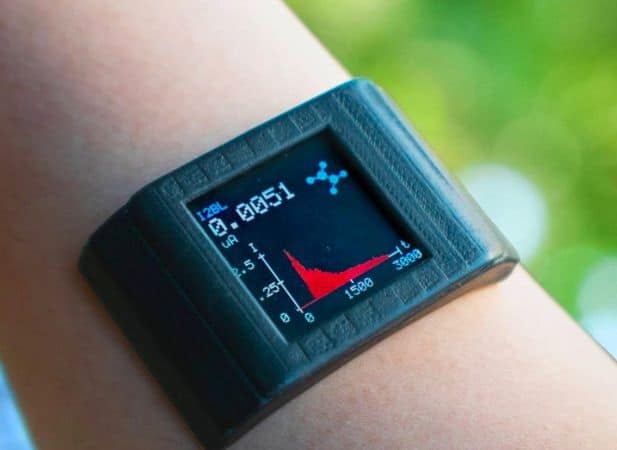 Researchers at UCLA have engineered a disposable, double-sided film that attaches to the underside of a regular smartwatch. The film can detect molecules and other body nutrient information from the body sweat.

The idea around the special adhesive is to analyze biomarker molecules found in your sweat. These biomarkers can be highly specific indicators of your health. Things such as glucose and lactate tell us how well our body’s metabolism is working.

By incorporating appropriate enzymatic-sensing layers in the film, the team specifically targeted glucose and lactate. These metrics indicate body metabolism levels and nutrients.

On the academics side of research, there have been some breakthroughs over the past few years. One of the most promising ones was the ability to use a wearable sensor to detect cystic fibrosis. Stanford published this study in 2017. It was a collaborative effort between Stanford and the University of Berkeley.

In 2018, researchers at the Salleo lab at Stanford were able to measure cortisol levels in sweat. Clinical tests that measure cortisol provide an objective gauge of emotional or physical stress in research subjects and can help doctors tell if a patient’s adrenal or pituitary gland is working properly.

This could be a big transformation in the wearables space. Imagine if you are able to easily monitor your stress levels and manage it better.

Although many prior studies looked into using sweat chemistry mechanisms in wearables, 2020, and 2021 seem more promising.

As wearables shipments continue to expand worldwide, and the competition heats up between the dominant players in the market, we are going to see new innovations in this space that can produce new meaning to the concept of sweat equity on your wearable. 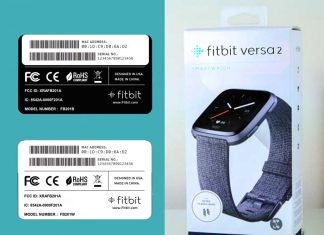 Need to locate your Fitbit smartwatch's or tracker's serial number, but finding that a difficult task? Learn the ways, with or without a box!

Apple Watch watchOS update too slow? Tips to speed up your update

Smart Rings: what, why, and who for?