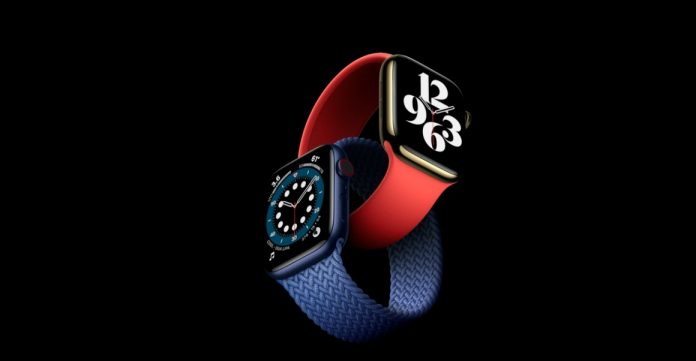 The company also unveiled a new iPad during this event. Let’s step in and look at some of the new Apple Watch Series 6 features that were announced at today’s event.

The Apple Watch 6 design is exactly the same as last year’s model, which isn’t unexpected given that Apple is more focused on the features and performance as opposed to changing the form factor.

Ceramic and titanium options now join the 40mm and 44mm Watch range (for different wrist sizes) and they look pretty sweet, although they start at an affordable price of $399.

The new Apple Watch Series 6 is also being offered for the first time in two additional color variants; Blue and Product Red.

The fitness capabilities of the Watch 6 have been improved with some additional offerings over that of the Watch 5 making it a terrific health tracker:

With the Apple Watch Series 6, you can swim, do high-intensity interval training, cycle, and even practice yoga to fill up those all-important rings that monitor your daily active performance.

Apple is also partnering up with various academia and health advocacy groups and offering three new ResearchKit based offerings. These are intended to position Apple as a leader in the front-line detection space.

The first of this engagement is a partnership with the University of California, Irvine to find out how SpO2 and heart rate monitoring can be used to alert patients who suffer from Asthma.

The second is a study partnered with the University of Toronto to study Heart Failure related issues and the third one is a collaborative effort with Seattle Flu Study to use Apple Watch as front line detection for numerous pulmonary based disease issues.

No clasp, no buckle, no overlapping parts!

This comfortable brand comes in 7 different colors and also there is an option for a braided brand that comes in 5 colors. 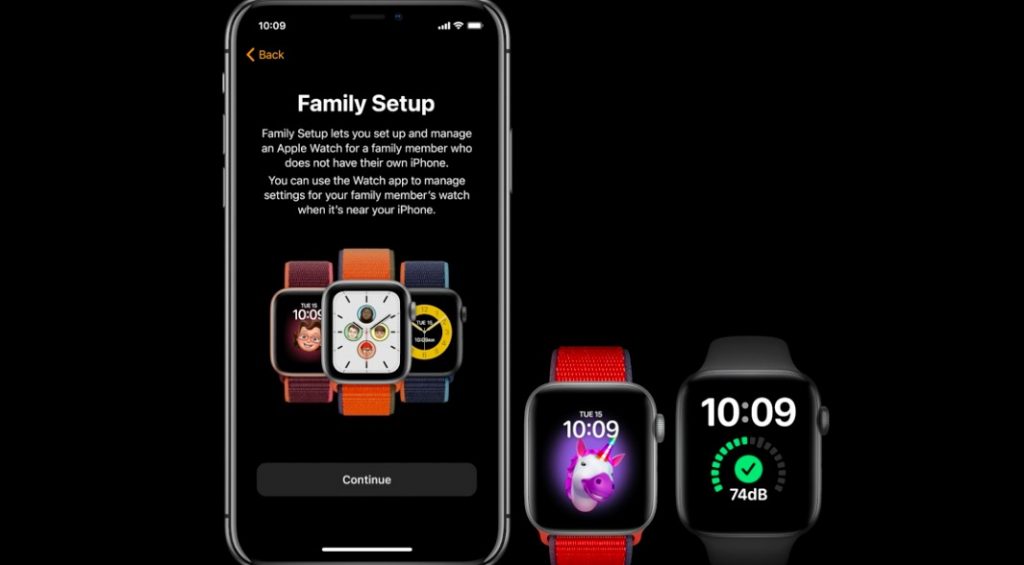 Apple also introduced Family Setup, a feature that allows you to pair your phone with your kids or elderly member watches. Their watches do not need a separate phone. You can control which contacts your kids can communicate with and more.

Apple also introduced the new Fitness+ fitness subscription program. Users will be able to use this new program and take advantage of the most popular workouts that include cycling, yoga, treadmill run, and more.

You can do these new workouts using any equipment.

Your Apple Watch would capture the activity data in real-time and provide you instant feedback.

Apple’s trainer team and fitness instructors will deliver new training programs every week that you can take advantage of. 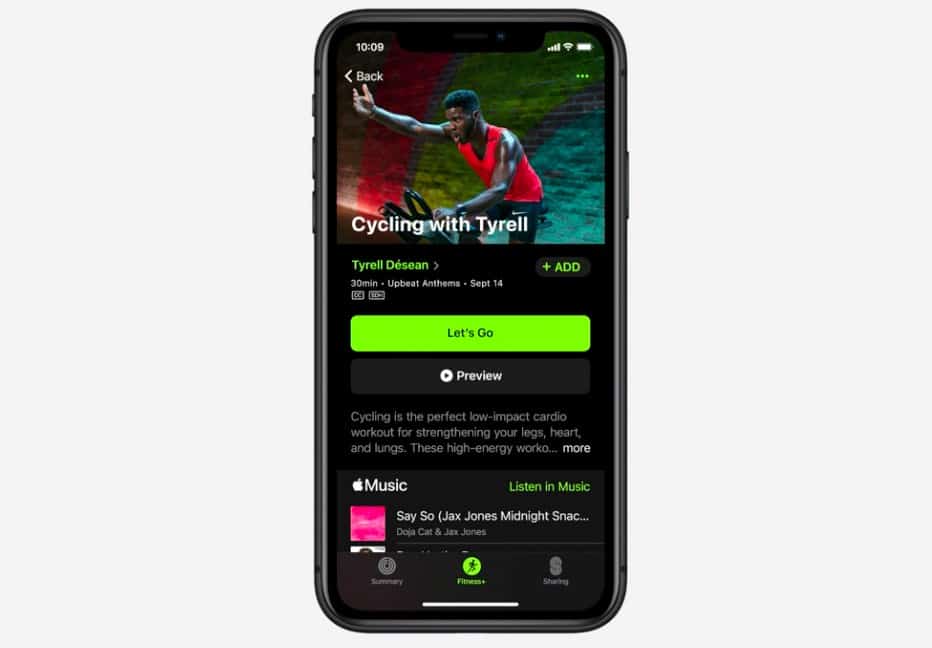 You can take advantage of the Fitness+ programs on your iPad as well as your Apple TV. You get the world’s best trainers and 10 different programs designed for both beginners and experienced athletes.

This is priced at $9.99 a month or $79.99 for the whole year. New Apple Watch purchasers will get 3 months free subscription. 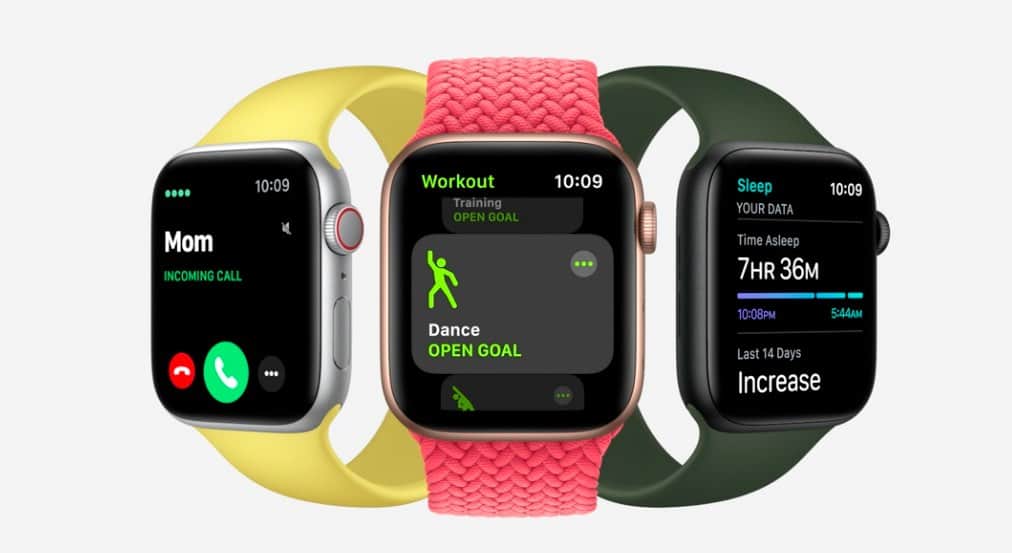 However, All this is also true for the slightly-smaller Watch 6 SE, which is cheaper. The new Apple Watch SE will not have the SpO2 monitoring feature but still features the fast S5 chip that was introduced last year.

Sleep tracking comes to both these models and is also available on the older Apple Watch models via watchOS 7.

The Sleep monitoring app will display a sleep analysis chart showing your sleeping pattern for the week, and leverages the Apple Watch’s accelerometer to gather movement data that can be used to tell whether you’re awake or asleep.

Unlike other wearable bands that offer Sleep tracking features, Apple does not offer details around the Sleep quality metrics such as REM sleep, etc.

The music and podcast playback of the Watch 6 is strong, and with 32GB of space onboard (an upgrade from 16GB last year) you can load up more tunes or download more podcasts.

From the now-famous Apple hand washing feature to other features such as support for turn by turn navigation during cycling to new health features such as Sleep tracking, detailed symptom tracking, and mobility metrics, the new OS shows that Apple is bent on delivering improvements to its flagship wearable product.

Also provides a feature where your watch will alert you if your VO2 drops under a certain threshold.

Battery life is the biggest issue we encountered on the old Watch 5, with the always-on display pulling more life out of the smartwatch.

Watch 4 could easily make it past 24 hours, but the Watch 5 struggled to match that. With Watch 6, Apple has made some changes that provide an improvement over the old Watch 5.

No support for Blood Pressure on Apple Watch 6

This is definitely going to dampen the mood of many Apple Watch users who were hoping for more features in the cardiology arena.

You can still use an Omron or Withings blood pressure monitor and pipe in your readings automatically over to the Apple Health app.

Given the release of the two new models of Apple Watch this year, we wanted to provide you with a comparison overview of the various models.

We will update the comparison table as we learn more details about the new Apple Watch SE series.

The new Apple Watch series will be available starting this Friday. You can pre-order now from Apple’s site.

The older Apple Watch Series 3 will be available for $199. Apple Watch Fitness+ subscription program starts at $9.99 a month. 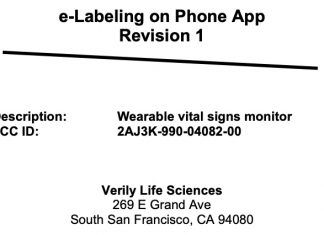 Verily Lifesciences received the approval for their new Verily Patch product and the associated app. Verily Patch is the wearable vital signs monitor that is...

Is your Apple Watch ECG App Missing? Here is how to get it back