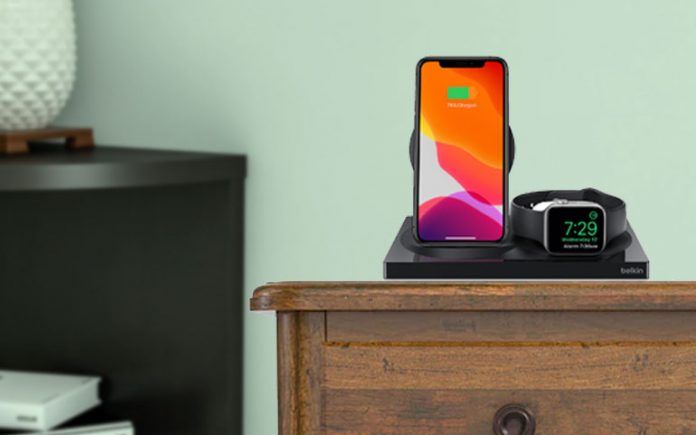 Another year, another series of new devices from Apple – including the upcoming Apple Watch Series 7. If you get your hands on one, or any Apple Watch for that matter, now is the time to look for the best Apple Watch accessories as well!

We’ve got everything from chargers to cases and medical IDs and other health tools as well. So, without any further ado, let us get right into it!

Nowadays, most of us have at least 3 devices that constantly need to be charged:

Having to charge all of them individually every single day is no doubt a bit of a pain. So, why not use one charger that can handle everything? That’s precisely what the Belkin 3-in-1 wireless charger does! 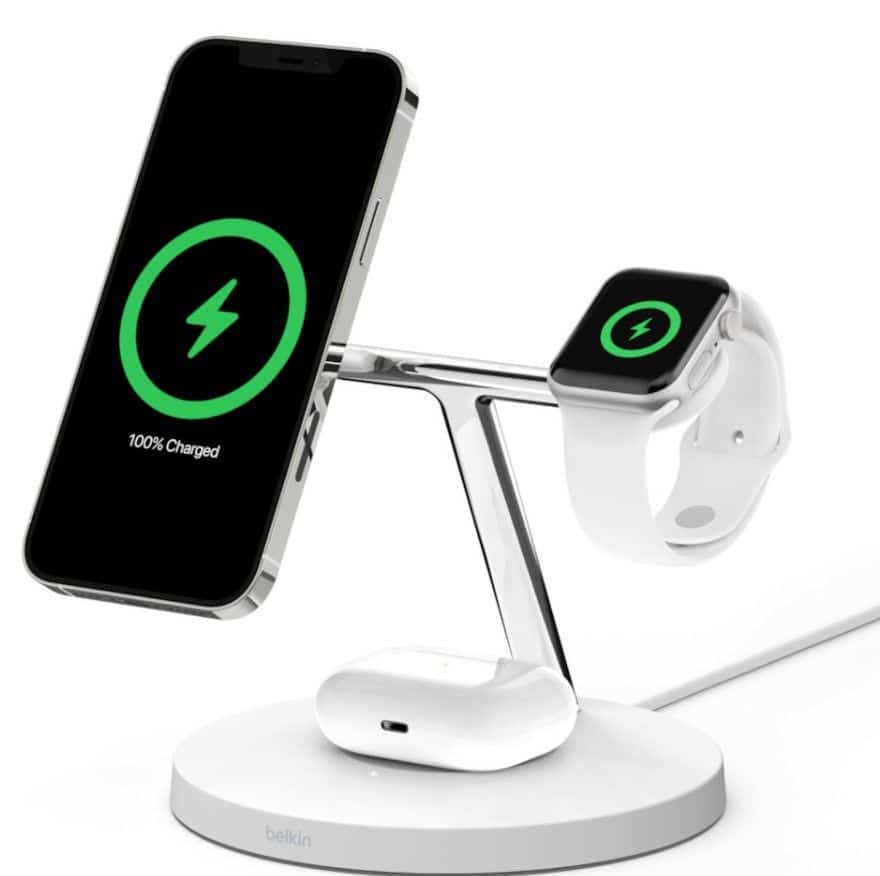 You can use this stand to charge all of your portable Apple devices with a single charger. However, do keep in mind that only the iPhone 12 supports MagSafe.

In case you are not familiar with it, MagSafe is a sort of magnet that’s attached to the charger that secures your phone and works with compatible Apple (And sometimes non-Apple) devices.

The iPhone 12 is currently the latest iPhone that’s compatible with this kind of technology. Older iPhones work as well, but, for some reason, they do so at a prolonged charging rate. So, we wouldn’t recommend this charger for older iPhone models.

Regarding charging rates, Belkin’s offering can go as high as 15 watts for the iPhone 12 with no cables attached.

This is Belkin’s alternative 3-in-1 charger that’s more down to earth – quite literally. Just like with its more pricey sibling, you can use this one to charge your iPhone, Apple Watch, and AirPods without swapping out cables, adapters, or anything like that. It all happens wirelessly. 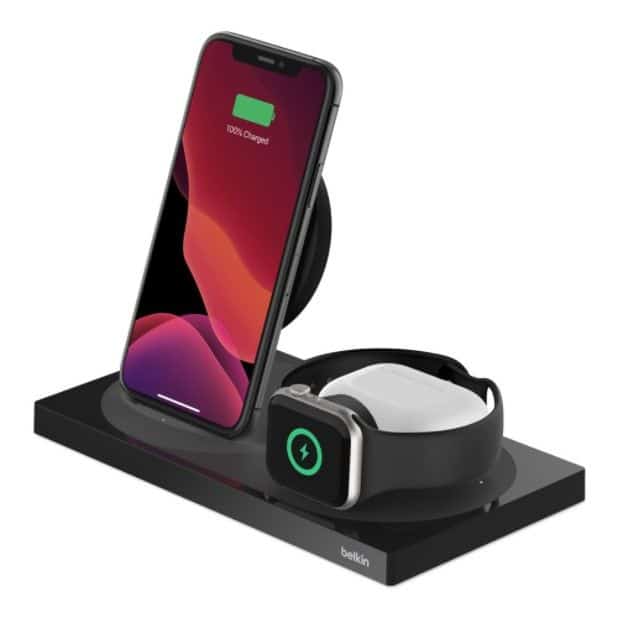 Unlike Belkin’s premium offering, though, this one doesn’t come with MagSafe or a fancy design. 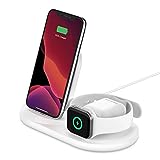 Belkin claims that this charger should work with pretty much every Qi-compatible phone as far as compatibility is concerned. And that applies for non-Apple devices as well – even if the charger was made with Apple ones in mind.

Another thing to keep in mind is that the charger can even work through most lightweight cases. To be more specific, 3mm of thickness is the limit.

Most Apple Watches are water-resistant but not waterproof. An easy and relatively inexpensive way out of that is using a waterproof case such as Catalyst’s offering. 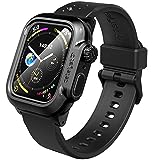 And the great thing about it is that it still allows you to keep on wirelessly charging the watch even with the case on. Not to mention that thanks to the digital grown dial, you can still use the Watch’s hard button.

Just keep in mind that this case is only compatible with Apple Watch Series 4 (42mm) and above due to its design. Older models are not going to fit.

With all that said, at the end of the day, don’t risk submerging your watch underwater unless you absolutely have to.

Smartwatches are great, powerful tools. But as far as battery life is concerned? Well, let’s say there are better options out there. When writing this article, if you want both a powerful smartwatch and great battery life, your best bet is a power bank for smartwatches – which is essentially what this gadget is.

This is a portable, wireless charger that’s pretty much a power bank for Apple Watches – meaning that you can charge your Apple Watch on the go without having to be plugged in.

Since it’s nothing more than a wireless charger with a battery in it, this Apple watch accessory should work with pretty much all Apple Watches.

Depending on the watch and the environmental temperature, you can expect to get about 1.5-2 charges out of it. And once you run out of juice, use a good old-fashioned micro-USB cable to charge it.

This is another 3-in1 dock/charger. But, unlike Belkin’s offering, OLEBR’s dock does not offer wireless charging capabilities. And that’s most likely one of the main reasons why it’s so much cheaper.

The great thing about this kind of design is that you get a wired dock’s low price point and fast charging speeds. And, at the same time, almost all the convenience that comes with wireless charging.

That’s because cable management is pretty good. The cables fit very snuggly in there, so all you have to do is place your device on the dock – almost as if you were using a wireless charger.

That’s also why it works with almost everything there is out there.

Nowadays, even the smallest gadgets are rather pricey. And that includes Apple Watches. So, why not spend a small amount of money giving them the extra protection they deserve? And what’s better for this case scenario than a good-old screen protector? 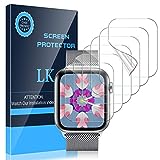 This particular pick comes with 6 screen protectors and is compatible with most 40mm and 38mm Apple Watches. So, it’s hard to go wrong with it.

And if something happens to one protector, you’ve got 5 more for less than $14! And it’s not just about protecting your screen from cracking. It’s also about scratch resistance and keeping the display clean.

Medical IDs can literally be life-saving. And that’s particularly true for semi-smart IDs such as QRepublik’s offering. 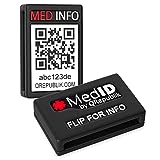 This is an inexpensive option that comes with a QR code that others can scan for more information. Furthermore, when someone scans the aforementioned QR code, selected contacts on your phone can get automatically notified about it in case of an emergency.

Last but not least, your smartwatch model makes little to no difference. Since all you have to do is insert the ID band to a watch strap, it works with pretty much every watch from 38 to 44mm. And it doesn’t even have to be an Apple Watch.

According to QRepublic, there are plenty of other watches that are going to work just fine. This includes Fitbit, Garmin, and Samsung smartwatches as well.

After getting a decent screen protector, the next thing in line is a case. Ideally, a rugged one – which is precisely what the Spigen Rugged Armor Pro is. If you want an extra layer of protection for your Apple Watch, this is one of the best Accessories for Apple Watch devices to get. 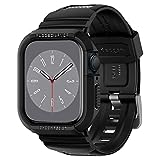 That aside, as you’d probably expect from a case like this, you still get access to both charging capabilities and hardware buttons while using it. Spigen doesn’t advertise it as waterproof, though, which may be something to keep in mind.

Some people find Apple’s straps to be a bit child-looking-like. If you belong to that category and are after something that feels a bit more premium, we can hardly think of any better Apple Watch accessories than a 3rd party leather band. 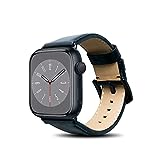 At the end of the day, that’s all; this is a leather strap/band. So, there’s not much else to say about it.

If there is one bad thing about it, that’s no doubt its price. At $89, you could easily get a budget smartwatch instead of just the band.

Alto’s band is great and premium-feeling. But it’s also costly for just a band. So, if you want a more budget alternative, definitely look into FnKer bands. 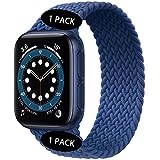 As far as budget bands are concerned, these are some of the best Apple Watch accessories you can get. There are plenty of shapes and colors to choose from, along with plenty of sizes depending on your watch.

Not to mention that this kind of material feels more breathable than leather. Whether it’s as comfortable and premium-feeling is up to you to decide. But, for the money, we’d hardly be able to complain no matter what.

If you like having a charging dock but tend to move around a lot, then Twelve south TimePorter may be for you. This is a traveling case and dock in one package. 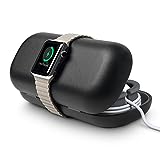 You can use the top of the case to place and charge your Apple Watch, while the inside can be used for storage. And if you have a small power bank, you can also place it inside the case to create the ultimate travel companion.

Since this is generally nothing more than a dock where you can place your Apple Watch charger, it should technically work with all Apple Watches. The official description mentions that anything from Watch Series 1 up to 5 should be fine.

Last on our list of the best Apple Watch accessories, and, in this case, also for iPhones, is a power bank that can work with both iPhones and Apple Watch devices. 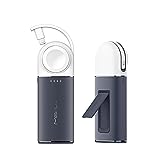 The only downside is that it still uses micro USB for charging, while most devices nowadays use Type-C or Lightning ports.

These are our top picks for now. We chose from various categories, including docks, power banks, medical IDs, cases, and even bands.

If you have any more recommendations, feel free to let us and everyone else know about them in the comments section down below!

Also, if you liked this article, you can follow us on social media so that you won’t miss any feature publishments.

We sometimes use affiliate links in our content from Amazon and others. It doesn’t cost you anything but helps us pay our expenses. Thank you for the support! Last update on 2023-01-26 / Affiliate links / Images from Amazon Product Advertising API 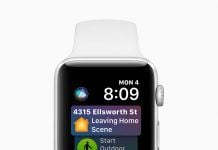 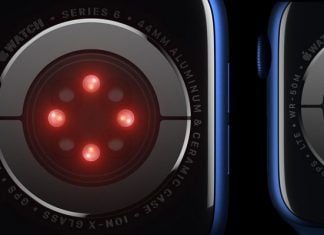 Smartwatches have come a long way in health and wellness monitoring since the introduction of the Apple Watch. FDA Approved ECG (Electrocardiogram) and Atrial...

Top 5 apps for asthma and other respiratory issues