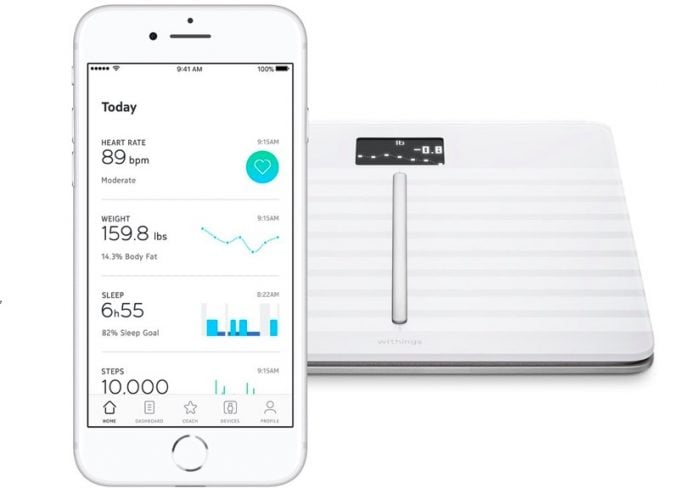 Like other fitness apps like Google Fit, Samsung’s fitness app gives you the option of syncing data with other apps and devices – including scales. The only deal is that not all of them work with it. So, you’ll have to find Samsung Health compatible scales.

You could spend hours and hours scrolling through the different options to see what works or not and if it’s good or not. Or you could also scroll through this list in 5 minutes and pick whatever fits you best!

So, with that said, let us get right into it!

One thing to keep in mind

Let us start by saying that smart scales, just like any other smart gadget, do not work directly with Samsung Health.

Instead, they first communicate with their main companion app, and then it’s the main app that syncs with Samsung Health.

For example, just like Garmin watches use Garmin Connect as the companion app and Fitbit watches use Fitbit, Xiaomi scales rely on MiFit, iHealth on iHealth My Vitals, etc.

So, the first thing you should do after getting a compatible scale is to install its main companion app and then sync it with Samsung Health.

And with that out of the way, we can move on with our top 4 picks.

As we’ve previously seen with smart devices such as the Mi Band, it’s no secret that Xiaomi generally offers insane value.

And things are more or less the same when it comes to scales, as the Xiaomi Mi Body Composition Scale 2 is one of the best Samsung Health compatible scales for the money.

What you need to do in this case is to connect the Mi Fit scale with Google Fit, and then Google Fit with Samsung Health.

You have to download the app of Xiaomi from the app store and then give the authorization to Samsung health or google fit to collect data from the Xiaomi app.

It’s a bit of an odd trick – but it may be very well worth it.

After all, Mi Fit is one of the highest ever rated Fitness apps, and the Body Composition Scale 2 offers an excellent value for what it offers. 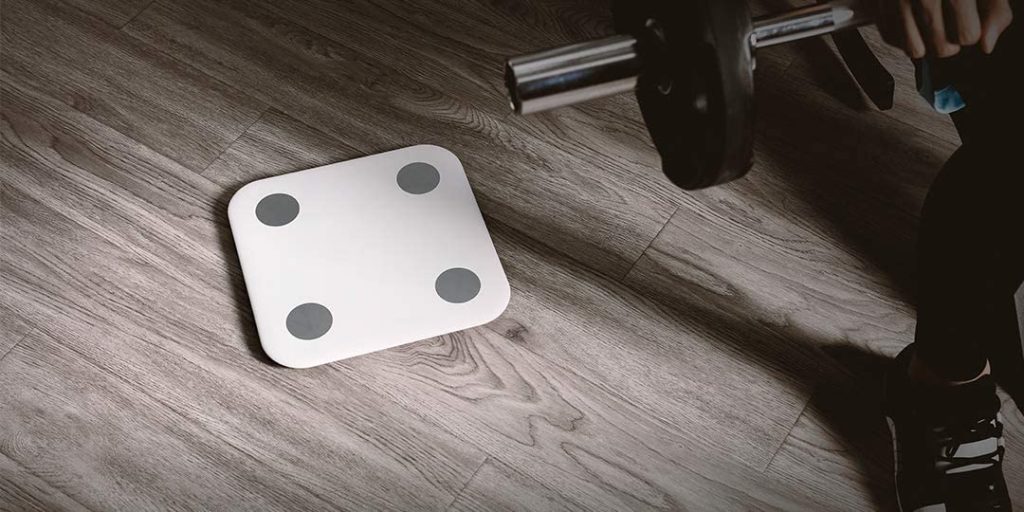 To be more specific, we are talking about:

And all of this for roughly $50, which, from our point of view, is one hell of a deal. 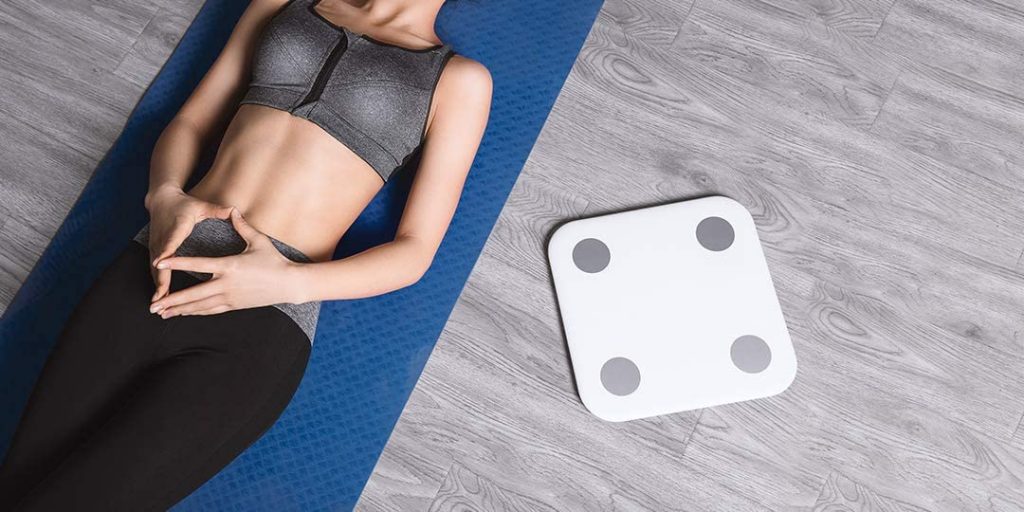 According to Xiaomi, its sensor is so accurate that it can detect a change in weight of as little as 50g. And speaking of weight, anything from 0.1KG to 150KG is within the acceptable range. 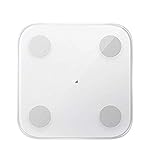 Another big plus is the software.

Mi Fit is one of the most stable fitness apps we’ve used on iOS and Android devices. Not to mention that it’s also a great “fit’ if you are planning on getting a Mi Band or another Xiaomi device that relies on Mi Fit.

There is, of course, the downside of also having to use Google Fit. But that’s a sacrifice that we are willing to make.

Lately, this scale has sold out! But don’t despair, there’s another great option from Xiaomi that’s still available (at least at the time of this writing.)

Don’t be fooled by the name. iHealth’s offering works with both iOS and Android devices – including the Samsung Health app.

Other than that, one thing that its name suggests that is actually true is the fact that this is a “light” version of a smart scale.

It only brings some basic, smart functions to the table without all the fancy features we’ve come to expect from pricier models.

Still, after a budget offering that works directly with Samsung Health, this is one of the best Samsung Health compatible scales that you can get! 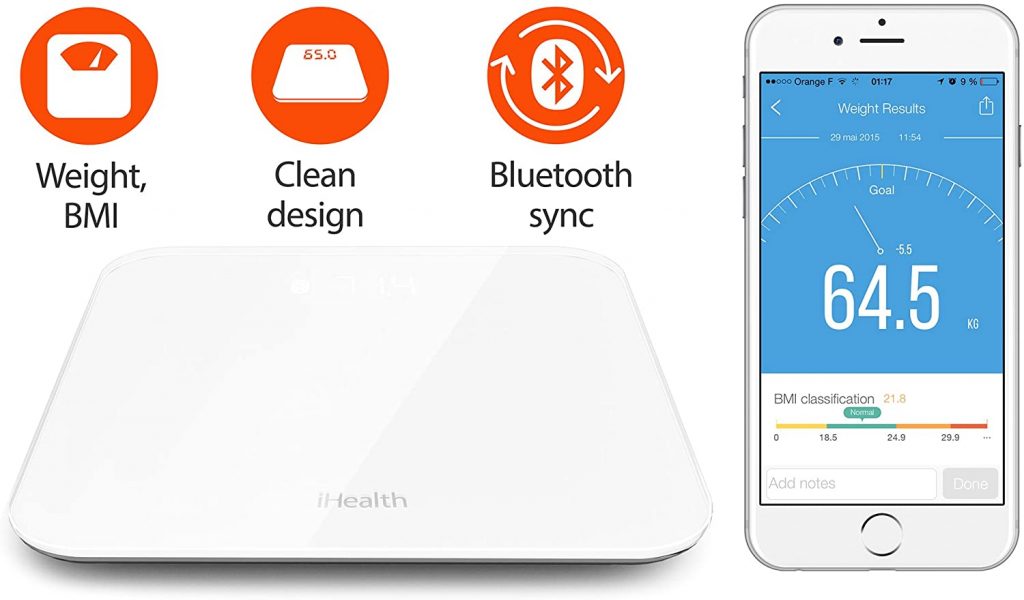 To be more specific, iHealth’s offering comes with:

Compared to Xiaomi’s offering, which is both cheaper and better in terms of features, iHealth’s scale is probably worse in terms of value.

However, the fact that it works directly with Samsung Health means that those who need just basic measurements will probably be better off with this.

After all, Xiaomi’s scale may offer better value – but it also needs Google Fit to work with Samsung Health, which some of you will definitely hate. 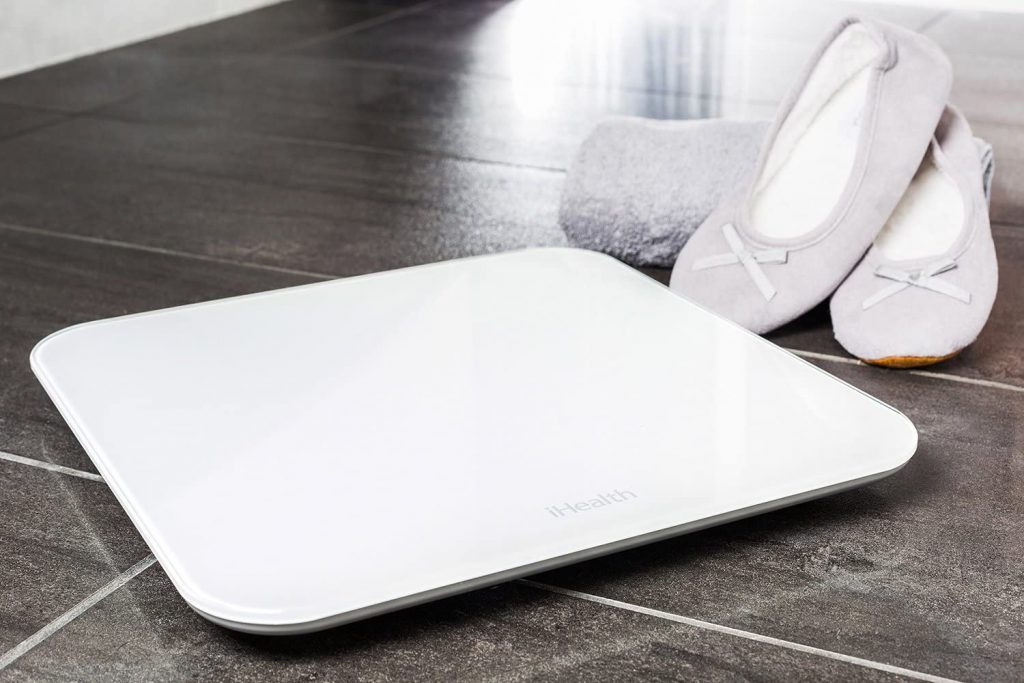 That said, one more advantage that this scale offers compared to Xiaomi’s offering is support for 30 more KG. 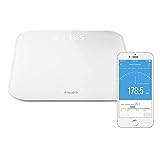 Some readers let us know that this scale is sometimes in stock and sometimes out of stock. Again, we have some options for folks interested in the iHealth brand and its features.

This scale work with the iHealth Myvitals app and syncs fitness data with Samsung Health, Google Fit and Apple Health. 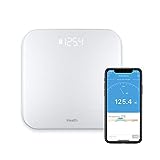 And for those looking for more advanced features check out the iHealth Fit Body Analysis Scale.

Plus, you can add up to 8 users and track your whole family.

The scale works with the iHealth Vitals app and that app syncs with Samsung health (and Apple Health.) 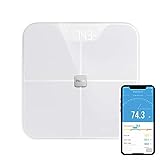 If you are after the most feature-rich option and you’re willing to pay the premium for it, the Withings Body+ is quite possibly your best pick.

Since it’s flirting with a $100 price tag, there is no doubt that it’s the most pricey pick on this list. But is it worth it?

First things first, it’s worth keeping in mind that it has a similar downside to Xiaomi’s scale.

While it works with Samsung Health, it doesn’t do so directly. You’ll need another 3rd party app that’s called MyFitnessPal. 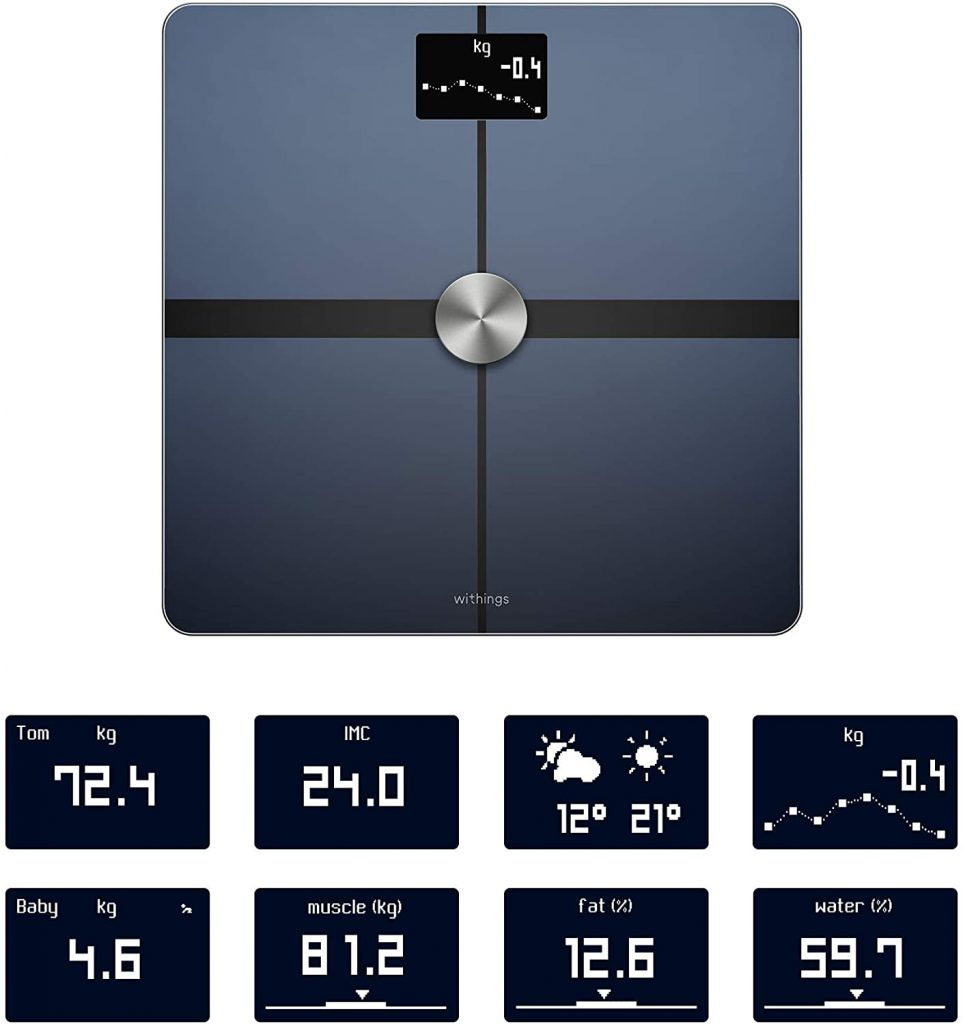 As far as features are concerned, you get pretty much everything that smart scales can offer in 2020. Things like: 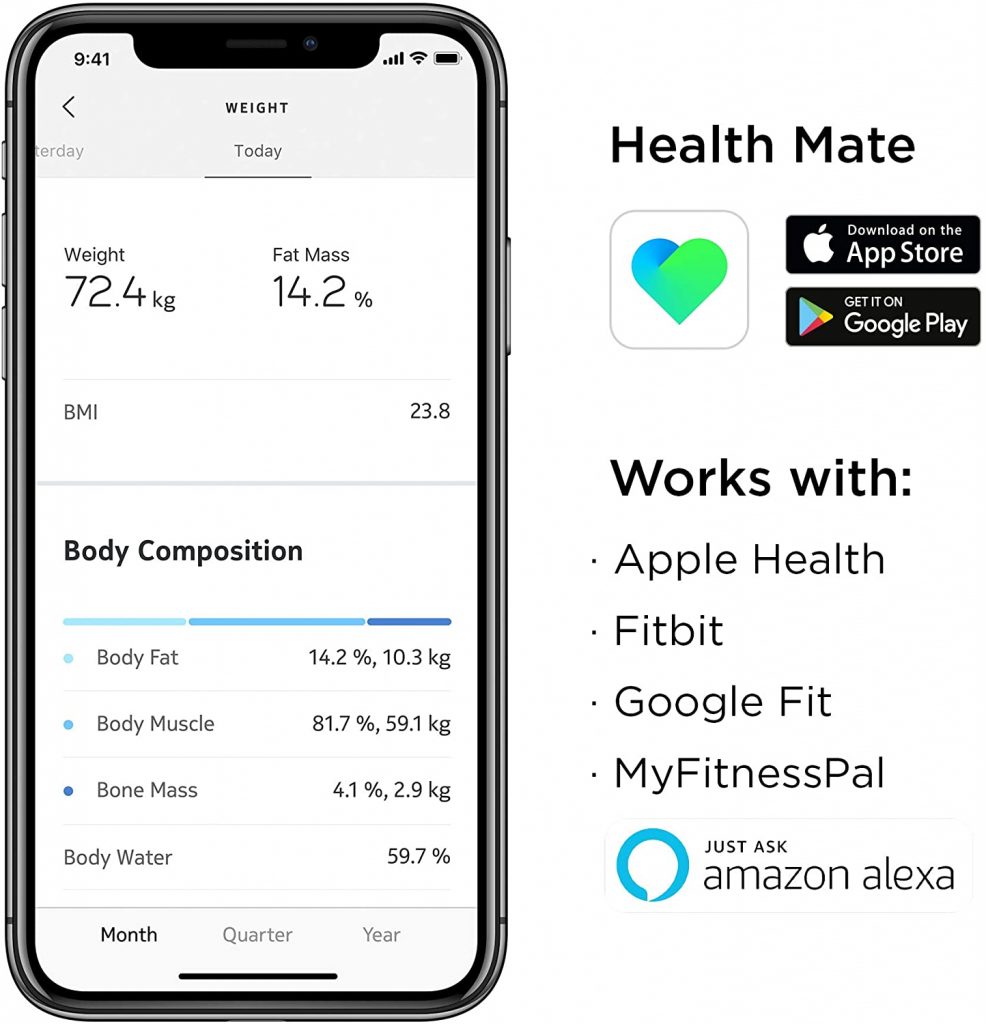 So, that’s no doubt a big list of features. Whether that makes this scale worth the money is up to you to consider.

That said, if there’s one thing that’s not up to debation is the fact that this is one of the most feature-rich smart scales out there at the moment. 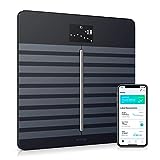 How Do I Connect Samsung Health With MyFitnessPal?

As we mentioned above, both the Withings Body+ and Xiaomi’s scale need a 3rd party app to work with Samsung Health.

In the case of Withings Body+, you need MyFitnessPal. So, to connect Samsung Health with MyFitnessPal, all you have to do is:

Then complete the syncing process by following any additional steps that MyFitnessPal may provide you with.

After that, you should also make sure that MyFitnessPal is connected to “Nokia Health mate,” which is the same thing as “Withings Health Mate”.

Then the Samsung Health app can take your scale’s data from MyFitnessPal.

It sounds a bit complicated when you read it, but once you get a grasp of it, you’ll realize it’s actually child’s play.

No one scale beats everything else. If we are talking strictly about useful features and stability, Nokia’s offering (Withing Body+) is probably your best bet.

Then again, some people don’t need so many features.

So, if you need something more basic, the Xiaomi Mi Composition Scale 2 is probably the way to go, saving you more money down the road.

And if you only need something fundamental that gets the job done as easily as possible, the iHealth Lite Smart Scale should be one of your go-to options.

Another popular one is the Rolli-Fit Smart scale that syncs with Google Fit, Apple Health, and works with Fitbit. 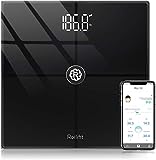 So, again, at the end of the day, it all comes down to personal needs and preferences. Choose whatever works best for you.

These are our top 3 picks for now.

While some more expensive options offer even more features, such as heart tracking, we highlighted scales that make more sense from a value standpoint.

That said, if you think there are more smart scales that are worth mentioning, feel free to let us and everyone else know about it in the comments down below!

If you liked this article, please feel free to follow us on social media for more content like this, along with health tips, tech news, how-to guides, reviews, and more!

In a letter sent to the Ranking Digital Rights organization, Apple’s Jane Horvath, senior director of global privacy, reiterated that the company believes that “privacy...

Just like with smartphones, smartwatches allow you to take screenshots of whatever is happening at that point in time. This guide, in particular, is...