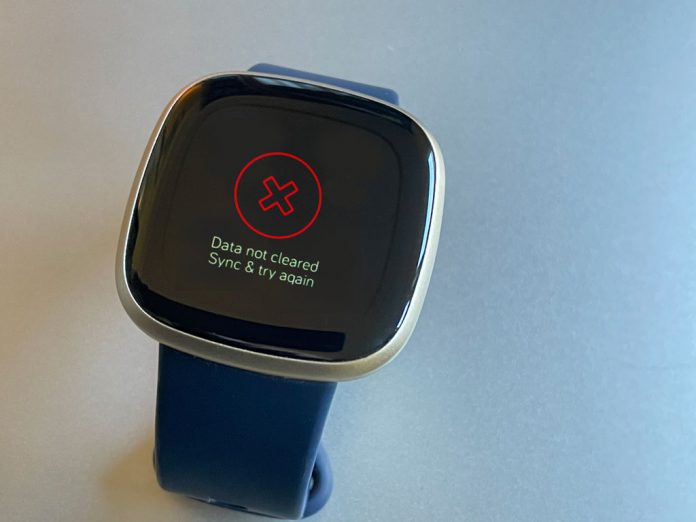 While Fitbits work smoothly most of the time, sometimes things don’t go to plan, and you see a big red X on your Fitbit’s screen with the message that it’s not been able to clear its data.

Usually, you can get past this screen by syncing to the Fitbit app (or via Fitbit Connect.)

However, if your Fitbit is stuck on this red X and can’t clear its data or the message keeps reappearing, we detail some troubleshooting steps that fix this error and hopefully get your Fitbit watch working again.

Review this checklist before you start troubleshooting.

Fitbit screen stuck on a red X and not clearing data? Check its pairing

If you connect your Fitbit to more than one mobile device (like an iPhone and an iPad) or computer, that might be the problem.

It seems that Fitbits work best when they only connect to a single computer, phone, or tablet.

Decide which mobile device (or computer) is most important to you to house your Fitbit data and the app. For any other devices, either remove the Fitbit app entirely or remove your Fitbit from the app.

Remove a Fitbit from the Fitbit app

After removing the Fitbit from any additional computers, mobile phones, or tablets, try syncing your Fitbit with the single remaining device using the Fitbit app and see if it clears the red X from your Fitbit’s screen.

Temporarily changing your Fitbit’s clockface often helps get your watch and the Fitbit app to refresh their connection.

How to change the clock face on your Fitbit

If the new clockface solves the problem, you can repeat these steps and change the clock face back to your previous one, if desired.

Re-pair your Fitbit to your phone’s Bluetooth

After successfully re-pairing with Bluetooth, wait for your device to automatically sync with the Fitbit app or tap Sync Now.

Clear your Bluetooth cache (Android only)

Android phones and tablets also include an additional Bluetooth feature to clear just the Bluetooth cache.

Replace your Fitbit in the Fitbit app

We frequently see this data not cleared error when folks recently factory reset their Fitbits (also called clear user data) but forgot to remove it from the Fitbit app first.

This tip often works even when you did not recently clear your Fitbit’s user data (factory reset.)

If you factory reset your Fitbit without first removing it from your Fitbit account, follow these steps

Remove your Fitbit from the Fitbit app and add it back

If your Fitbit continues to display the message data not cleared sync & try again and you already tried the Bluetooth tips above, completely removing your Fitbit from the app might do the trick.

If your Fitbit is still showing that its data is not cleared, a factory reset is the last step to try.

When you reset your Fitbit back to factory standards, you lose any data, like step count and other activity/health information, that was not previously synced to your Fitbit account.

Additionally, any third-party apps, clock faces, and other customizations are also removed from the Fitbit.

Before you factory reset, remove your Fitbit from the Fitbit app following the directions above.

If you can navigate (swipe) to a different screen on your Fitbit, use these steps to factory reset your Fitbit.

For the newest Fitbit watches, try this manual reset process only if you cannot access the software method, and your Fitbit is still stuck on the red X screen.

See this article. Need to restart or reset your Fitbit? Learn the steps for detailed step-by-step directions on resetting your Fitbit model.

If, after all these troubleshooting steps, your Fitbit continues to be stuck on that screen or if it routinely pops up, reach out to Fitbit Customer Support for further assistance.

Before contacting Fitbit, ensure you have your serial number, proof of purchase, and check its current warranty status.

Fitbit generally offers a one-year warranty for most of its wearables in the US and two years for Europe. If your Fitbit is under warranty and their support team cannot fix it, they send you a replacement at no charge.

Even if your Fitbit is more than 1 or 2 years old, Fitbit Support usually offers a replacement discount. 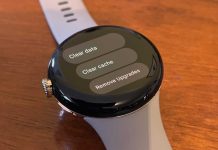 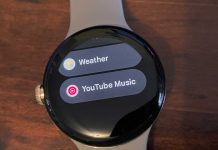 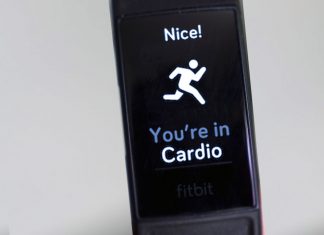 Forget 10,000 steps a day! How to use Fitbit active zone minutes and why they matter

It's time to toss out the 10,000 steps a day rule and replace it with a weekly goal for overall moderate-intensity and/or vigorous activity....

Apple Pay not showing up or working on Apple Watch